Welcome to the Home of the “Thank You America” Series 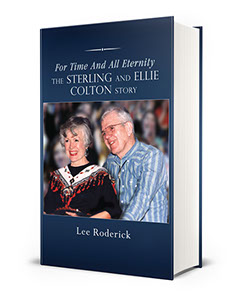 “A love story between a most remarkable man and outstandingly  delightful  woman  from the Rocky Mountain West, woven through seven decades together.”

FOR TIME AND ALL ETERNITY

The Sterling and Ellie Colton Story by Lee Roderick

Eleanor Ricks left her Idaho home and journeyed to Salt Lake City to enroll at the University of Utah. Entering the freshman girls' dorm, she got on the elevator from the front. At the same moment Nancy Colton entered the back of the elevator, with her brother Sterling, who carried her luggage. Both girls punched the third-floor button. When the elevator opened, Sterling dropped Nancy's suitcases and picked up Ellie's, carrying them to her room.

"I liked him right away!" said Ellie. After a five-year courtship, Sterling and Ellie were married. "Her mother sent her to the 'U' to find a husband," quipped Sterling. "I was fortunate that she was not very picky and chose the first boy she met." Ellie said, "He has been carrying my luggage ever since."

Rarely do two people complement each other so perfectly and are so completely in love.

Sterling is serious and responsible. Ellie is full of fun and occasionally irreverent. Both are excellent leaders. Their life together has unfolded over seven delightful decades. They have raised four outstanding children––three boys and a girl––traveled the globe, assisted numerous needy individuals, and spearheaded a variety of good causes.

Sterling and Ellie were born and reared in the Rocky Mountain West. They remained there as a couple and family until 1966 when J.W. Marriott, Sr. recruited Sterling to Washington, D.C. to head  his company's legal team. The Coltons began an adventure-filled new life in the nation's capital.

As Marriott International's general counsel, Sterling became widely known among colleagues as the "conscience" of the company. J.W. (Bill) Marriott, Jr., who succeeded his father as company leader, called Sterling his best friend and relied on his legal judgment as Marriott grew from a relatively small enterprise into the world's largest hotel company.

In the early 1990s, a tumultuous time for financial and construction industries, Marriott came perilously close to insolvency. It was saved by splitting the company into two companies. Sterling was credited with directing the split that saved Marriott.

At home the Coltons were a cohesive, all-American family––working side by side in their house and yard; volunteering community service; supporting their daughter's creative activities; cheering their sons' basketball and football teams. The Coltons skied; visited Disneyland; fished in Alaska; and soared over France's Loire Valley in a hot-air balloon.

Sterling bungee-jumped in New Zealand; Ellie rode a camel into the Egyptian desert with her "Sheik." Together they sailed the Mediterranean on a romantic cruise ship, Sea Cloud; safaried in southern Africa; rode elephants in Thailand; and watched for birds from Canada to Antarctica.

The Coltons adopted as their family motto: "Choose you this day whom ye will serve...but as for me and my house, we will serve the Lord." (Joshua 24:15) All three sons served two-year missions for The Church of Jesus Christ of Latter-day Saints, and were married in an LDS temple. Sterling and Ellie presided over a variety of local Church organizations as well as a mission and a temple.

Undergirding everything is the love between Sterling and Ellie. This book is their story. The Vision and Genius of James LeVoy Sorenson by Lee Roderick

Jim Sorenson was born into poverty to teenage parents. As a small boy in northern California he shelled walnuts and sold magazines door-to-door to help put food on his family's table. Hope for a better future was dashed for a time by his elementary school teacher who branded him “mentally retarded.”

Yet during his lifetime Jim rose to rare heights as an inventor, entrepreneur, and one of the world’s richest men. The dyslexia that made reading extremely difficult early in  life sowed seeds of genius in his mind. Jim invented dozens of medical devices that continue to save lives and lessen suffering for millions across the globe. They include disposable surgical masks, non-invasive plastic venous catheters, blood recycling and infusion systems, and the first real-time heart monitoring systems.

Jim was an American original––eccentric and complex, who preached teamwork but was utterly incapable of being anything but the leader; insistent on his rules but indifferent to everyone else’s. He played a pivotal role in pioneering entire industries, launching some forty companies.

He created unique ways to build personal wealth, that can be followed profitably by others.

Jim was also a philosopher and an idealist. He poured a fortune into a quest for world peace. He brought antagonistic religions together in international conferences, and gathered 100,000 human DNA samples from across the globe. He believed that if diverse peoples were shown they are related by blood they would learn to live in harmony.

Jim and his remarkable wife of six decades, Beverley Taylor Sorenson, had eight children and fifty-one grandchildren. A billionaire by the end of his life, Jim weighed his numerous accomplishments and repeated what he had written years earlier in a book called Finding the Better Way. He wrote just one sentence in bold-face type: "True wealth only comes through health and family and friends.” 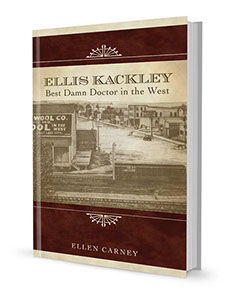 Best Damn Doctor in the West by Ellen Carney

"A compelling portrait of a courageous physician who became what all of us in the healing arts should be." -Jeffrey S. Job, M.D.

ELLIS KACKLEY Best Damn Doctor in the West opens as Dr. Kackley is graduating from medical school at the University of Tennessee and prepares to face unknown frontiers in the small, lawless town of Soda Springs, Idaho. Surrounding him in his new home are vibrant characters: his wife Ida, J. Edward Beus, who rented a baby; midwives like Dorthea who tore up her petticoats for bandages; Ashler, sinister proprietor of the hotel-turned-hospital; Jenny the prostitute, and many others. This unforgettable portrait of an early western doctor in small-town America is filled with humor, warmth, tenderness and sadness. Ellis swims the Bear River to deliver a baby, takes out a man's kidney in a sheep camp, and attracts patients––including outlaws from across the U.S.

Ellis gives his life to medicine, but loses the things most precious to him in the process. 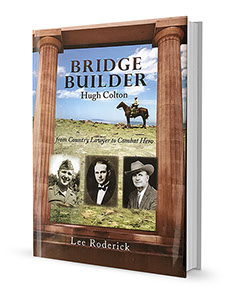 Hugh Colton had an idea. In his mid-20s and looking to make his mark, he had already accomplished a lot—served a volunteer two-year mission for his church, graduated from college, married a trophy wife, Marguerite Maughan, and now had a civil service job and was in law school in the nation’s capital.

Busy as he was, something still tugged at Hugh. Early in 1927 he wrote his good friend J.W. (Bill) Marriott, back home. Root beer, a new-fangled drink that was the rage in their native Utah, might be a hit in muggy Washington. At Hugh’s suggestion, Bill secured a franchise from A&W Root Beer for the greater capital area. On May 20, 1927 three young men on the East Coast took off: Charles A. Lindbergh, to cross the Atlantic solo for the first time, and Hugh and Bill, who opened their nine-stool root beer stand that same morning. Lindbergh, of course, made it—and so did Hugh and Bill. They charged just 5 cents for a frosty mug of root beer. Not a lot, but enough to launch what became Marriott International.

The following year something else tugged at Hugh: a longing to be back home in the West and, especially, to be with his beloved horses. Failing to talk the Coltons out of leaving, Bill bought their half of the business for $5,000. Hugh and Marguerite returned to Vernal, Utah. Hugh became a rancher and country lawyer, while Marguerite took the lead in rearing their four children and tending to numerous civic causes.

As World War II crept closer to America’s doorstep, Hugh, at 40, organized a local unit of the Army National Guard. He had a ranch, a law practice, and four children to guide, but could not deny the call of his country. For the next five years, as Marguerite kept the home fires burning, Hugh led combat engineer troops in the US, the UK, and from the shores of Normandy to the heart of Germany. One correspondent called Hugh and his men the “bravest of the brave.” Hugh received a battlefield commission to full colonel from Supreme Allied Commander Dwight Eisenhower, and returned to Utah as one of its most decorated heroes. He and Marguerite dedicated the rest of their lives to lifting their country, their community, and their family. 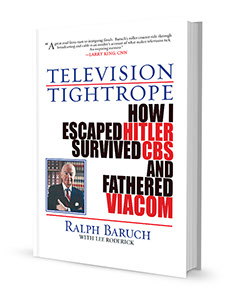 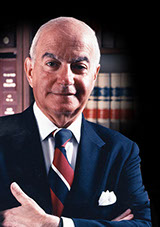 How I Escaped Hitler, Survived CBS, and Fathered Viacom by Ralph M. Baruch

To purchase Tightrope, click available titles or on the header above

If you get more than a handful of television channels, thank Ralph Baruch. Facing great odds, Baruch—once a top executive at CBS and founder of Viacom—led the pivotal battles against broadcasters, regulators, and legistlators that pried Washington's fingers from the neck of cable television and set it soaring.

CBS spun off tiny Viacom, led by Baruch. The parent had 28,000 employees, the child 200. CBS and federal agencies piled on oppressive conditions that nearly strangled Viacom in its crib. But Viacom survived to become the world's largest entertainment company—returning nearly three decades later, in 1999, and buying CBS. Tightrope is also an intimate memoir. As Nazis poured into Paris in World War II, teenaged Ralph led the escape of his family, carrying his grandmother over the Pyrenees Mountains to Spain and then freedom.

Ralph’s first wife died tragically, leaving four young daughters. Years later he fell in love with a remarkable woman who would anchor Ralph through all the turbulence ahead. He had survived Hitler, CBS, feckless government bureaucrats, and greedy outsiders who coveted Viacom. But—until too late—he failed to see the slash of the knife wielded by some insiders bent on buying and carving up the company Baruch had led since its birth. Ralph, however, had not yet played his last card. In the wings was Boston businessman Sumner Redstone. In a titanic takeover struggle, he wrested Viacom from the cabal of insiders. It remained to be seen if Redstone would also carve up and sell off Viacom—as analysts predicted—or continue to build the global enterprise envisioned by Ralph Baruch.

Read what others have to say about Television Tightrope 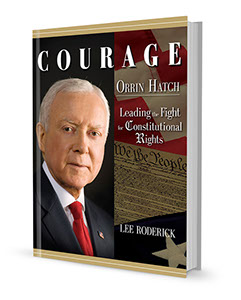 608 pages including 94 pages of photos, Sources and Index

If every member of the Senate was like Orrin Hatch, we'd be arguing over how to deal with a federal surplus...I like to think of Orrin as 'Mr. Balanced Budget.' 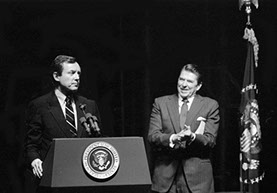 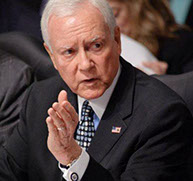 Let us take courage from the immortal excellence of The Constitution & heart from the fact that we Americans pulling together have always risen to any challenge.

At a time of turmoil in Washington, Senator Orrin Hatch is needed more than ever, writes author Lee Roderick. The Utah conservative has written some of the nation’s most important laws—and stopped some of the worst ideas from becoming law.

Hatch is the Senate’s leading consensus-builder for conservative ways to solve national problems. Recently named one of America’s 21 best leaders, U.S. News & World Report explained that Hatch “has demonstrated that a member of Congress can work to pass meaningful, bipartisan legislation without compromising his core principles and strongly held ideological convictions.”

The Utahn is the Senate’s No. 1 sponsor of constitutional amendments to balance the federal budget, and a leading foe of Obamacare and other wasteful government spending. Courage shows in plain terms the greatest challenges facing the United States—and how to meet them. It is unusually reader-friendly, with over 100 pages of photos, many with page numbers where the reader may learn more on that topic.

...(Hatch can) fight to set the country right; to save it from financial ruin.